Save the city with the world's most famous team of rescue pups.

London, 10th May 2021 - Bigger city, bigger adventures and the PAW Patrol™’s biggest rescue mission yet! Outright Games, the leading global publisher of family friendly interactive entertainment, in partnership with Nickelodeon, today announced the upcoming release of ‘PAW Patrol The Movie: Adventure City Calls’. Fans can join the PAW Patrol as they head to the big city and meet a new pup pal in this brand-new video game based on the franchise’s first full-length feature film ‘PAW Patrol: The Movie’, a Spin Master Entertainment production in association with Nickelodeon Movies, which will be distributed by Paramount Pictures and released into theatres on August 20. ‘PAW Patrol The Movie: Adventure City Calls’ will be available this Summer on PlayStation®, Nintendo Switch™, Xbox and Steam priced at $39.99 / £34.99 / €39.99. 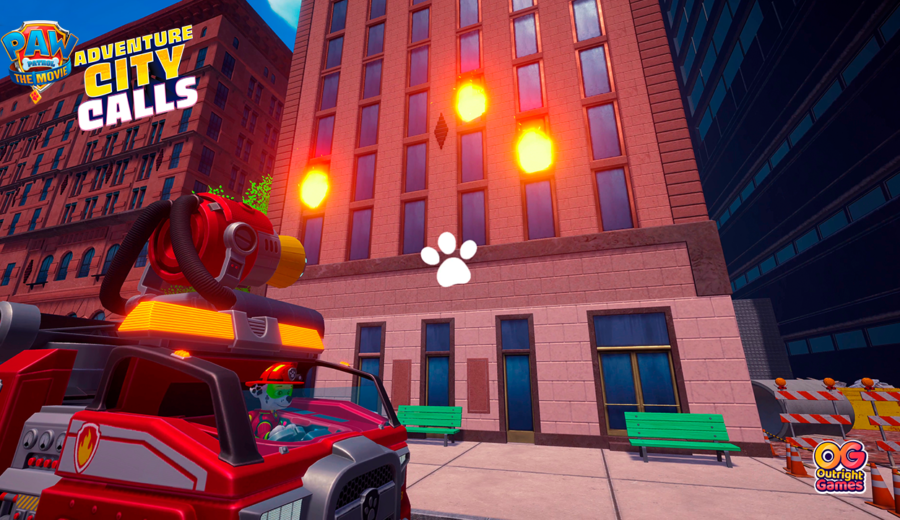 When the PAW Patrol learns that Mayor Humdinger has taken over a buzzing metropolis, they must save Adventure City from his selfish scheming! Fans become the pups – including Chase, Skye, and a brand-new pup pal– and use their unique abilities in high-stakes rescue missions. Deploy next-level gadgets and vehicles to explore the city and have even more fun with minigames like ‘Pup Pup Boogie’. With solo play and local co-op modes, this fun-for-all 3D platformer gives young gamers and their families the chance to join the PAW Patrol on their bravest mission yet.

PAW Patrol is a global pre-school entertainment brand, and is consistently ranked as a top-rated preschool series, topping charts since it first aired in 2013. The global phenomenon reaches over 170 countries through the animated series, toys, apparel, games and live attractions. Children who love PAW Patrol will be treated to more action-packed adventures with the first full-length feature film ‘PAW Patrol: The Movie’ coming to the big screen on August 20.

With this new video game ‘PAW Patrol The Movie: Adventure City Calls’, Outright Games continues one of its longest and most impactful partnerships with Nickelodeon, having previously released top selling games in the franchise including ‘PAW Patrol: On a Roll’ and ‘PAW Patrol: Mighty Pups Save Adventure Bay.’

‘We are beyond delighted to be making not only the third PAW Patrol video game as part of our enduring partnership with Nickelodeon, but the first based on a feature length film set in this incredible world,’ said Terry Malham, CEO of Outright Games. ‘The pups are incredibly special to us as they are to millions around the world and it’s a great honour to be able to create such fun interactive entertainment for all the fans to enjoy.’

Outright Games is a global video games publisher with a focus on quality family entertainment to a worldwide audience. Founded in 2016, Outright Games has established its place in the market delivering engaging interactive games of beloved entertainment licenses globally. Outright Games brings stories and characters to life with titles including favourites such as Jumanji: The Video Game with Sony Pictures, PAW Patrol: Mighty Pups Save Adventure Bay with Nickelodeon, Ben 10: Power Trip with Cartoon Network, and Dragons: Dawn of New Risers with NBC Universal. With an Outright Games title there will be fun for all the family to enjoy. For more information please visit: www.outrightgames.com

Spin Master Corp. (TSX:TOY) is a leading global children’s entertainment company creating exceptional play experiences through a diverse portfolio of innovative toys, entertainment franchises and digital games. Spin Master is best known for award-winning brands PAW Patrol®, Bakugan®, Kinetic Sand®, Air Hogs®, Hatchimals®, Rubik’s Cube® and GUND®, and is the toy licensee for other popular properties. Spin Master Entertainment creates and produces compelling multiplatform content, stories and endearing characters through its in-house studio and partnerships with outside creators, including the preschool success PAW Patrol and nine other original shows along with multiple short-form series, which are distributed in more than 190 countries. The Company has an established digital presence anchored by the Toca Boca® and Sago Mini® brands, which combined have more than 40 million monthly active users. With close to 2,000 employees in 28 offices globally, Spin Master distributes products in more than 100 countries. For more information visit spinmaster.com or follow on Instagram, Facebook and Twitter @spinmaster.