Play as Jim Lake Jr., and travel through time to catch the trickster troll Porgon. Stop the time-pocalypse!

London, September 25, 2020 - Outright Games, Universal Games and Digital Platforms, and Bandai Namco Entertainment Europe today announced the launch of its brand-new video game, DreamWorks Trollhunters Defenders of Arcadia, available on Playstation® 4, Xbox One, Nintendo Switch ™ and PC Digital Download. Trollhunters Defenders of Arcadia is an action-adventure platform game based on the Emmy®- winning Tales of Arcadia trilogy from DreamWorks Animation, now streaming on Netflix. The trilogy is made up of Trollhunters, 3Below and the recently released hit series, Wizards, and was created and executive produced by Academy Award® winning filmmaker Guillermo del Toro. 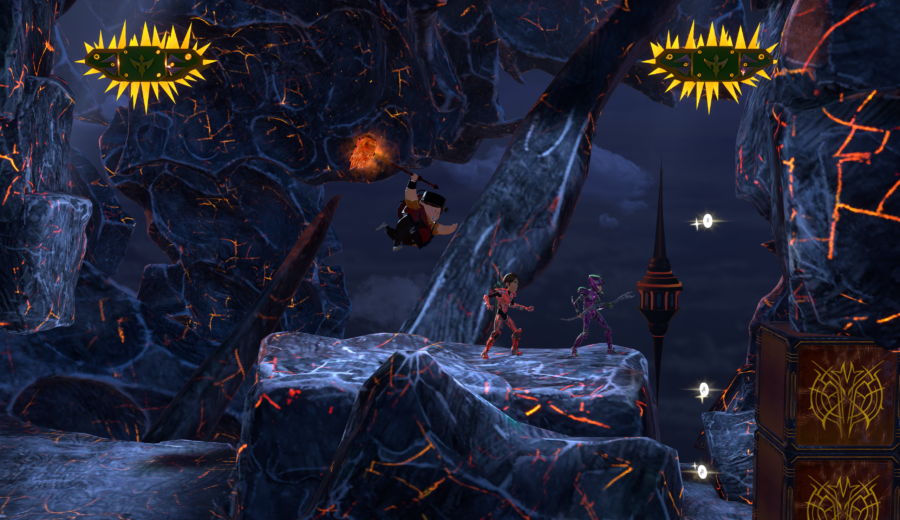 Developed by notable game studio, Wayforward, DreamWorks Trollhunters Defenders of Arcadia, tells a new action-packed story that takes place between the distinct fantasy worlds of the three series and serves as a key narrative beat that unifies the trilogy.

Players assume the role of fan-favorite character, Jim Lake Jr., as he travels through time to catch the trickster troll Porgon and attempt to stop the time-pocalypse. Players will go on an adventure across the game’s unique worlds and meet familiar characters as they level up armor, gain new abilities and become the hero of Arcadia. Fans can expect all-new content recorded specifically for the game from stars of the series, including Emile Hirsch as Jim Lake Jr., Charlie Saxton as Toby Domzalski, Lexi Medrano as Claire and David Bradley as Merlin.

“Jim is a really special character so I’m very proud to be part of this new video game, which I hope will appeal to a whole new audience of Trollhunters fans,” said Emile Hirsch, who voices Jim Lake Jr., the lead protagonist of the series and video game. Charlie Saxton, voice of Toby Domzalski, said, “It’s been a blast voicing Toby throughout the Tales of Arcadia series, and bringing that character to life in a video game is something I’m very excited to share with our fans.”

“Trollhunters Defenders of Arcadia builds on the fascinating narrative and compelling characters that have been expertly established in the popular trilogy,” said Jim Molinets, SVP of Production, Universal Games and Digital Platforms. “The game provides a deeply rich and immersive gameplay experience that we hope fans will enjoy with friends for a long time to come. ”

DreamWorks Trollhunters Defenders of Arcadia is available now for PlayStation 4, Xbox One, Nintendo Switch and PC Digital. The final installment of the Tales of Arcadia trilogy, Wizards, is streaming now on Netflix.

DreamWorks Animation (DWA), a division of the Universal Filmed Entertainment Group, within NBCUniversal, a subsidiary of Comcast Corporation, is a global family entertainment company with feature film and television brands. The company’s deep portfolio of intellectual property is supported by a robust, worldwide consumer products practice, which includes licensing, and location-based entertainment venues around the world. DWA’s film heritage includes many of the world’s most beloved characters and franchises, including Shrek, Madagascar, Kung Fu Panda, How to Train Your Dragon, Trolls and The Boss Baby, and have amassed more than $15 billion in global box office receipts. DreamWorks Animation’s television business has quickly become one of the world’s leading producers of high-quality, animated family programming, reaching consumers in more than 190 countries. Creating a diverse array of original content in a variety of formats and delivering deep, fully immersive worlds served up with compelling characters, the studio has garnered 25 Emmy® Awards since inception in 2013.

Universal’s Games and Digital Platforms group leverages the vast portfolio of IP and characters from NBCUniversal. The Games and Digital Platforms group is a business unit of Universal Brand Development, which is chartered with globally expanding the company’s intellectual properties, franchises, characters and stories through innovative physical and digital products, content and consumer experiences. The company’s extensive portfolio includes properties created by Universal Pictures, Illumination Entertainment, DreamWorks Animation, and NBCUniversal cable and television. Universal Brand Development is part of NBCUniversal, a subsidiary of Comcast Corporation. www.universalbranddevelopment.com

Based in Valencia, California, WayForward was founded in 1990 and has remained an independent game developer for nearly 30 years. We are home to many talented individuals including programmers, environment artists, animators, modelers, illustrators, audio wizards, designers, and team leaders. With the new avenues for distributing games directly to fans we are finally able to make the games we have always wanted to.

Want to know more about ‘Trollhunters: Defenders of Arcadia’?