My Little Pony: A Maretime Bay Adventure rides onto consoles and PC today!

The fifth generation of ponies from the smash hit Netflix movie My Little Pony: A New Generation gallops onto PC and consoles

London, 27th May - Outright Games, the leading publisher of family-friendly interactive entertainment, in partnership with Hasbro, today launched My Little Pony: A Maretime Bay Adventure. The first My Little Pony console and PC game in five years marks the return of the one of the best loved entertainment franchises to video games and introduces the latest generation of ponies to a whole new audience of fans. Explore the enchanted world of Equestria with Sunny and her friends in this new adventure full of friendship and magic available now on Nintendo Switch, PlayStation 4, Xbox One and PC. The game will also launch on Google Stadia in summer with free next gen upgrades for existing Xbox and PlayStation 4 owners later in 2022.

It’s time to celebrate as preparations are in full swing for Equestria’s Maretime Bay Day Festival. However, one pony is out to spoil the party! Join the adventurous Sunny, kind Hitch, creative Izzy, courageous Zipp and confident Pipp as they attempt to save the day and put on the best festival ever!

Play as Sunny and use her magic powers to complete tasks and challenges with special unlockable pony skills to fly, jump and skate around the fantastical world of Equestria. Customise Sunny along the way with new clothing and accessories to make sure she looks her best for Maretime Bay’s big day!

And the fun doesn’t stop there! Invite a friend for a multiplayer party with five minigames where both players can put on a fashion show, herd bunnies and much more.

Terry Malham, CEO of Outright Games said ‘’We’re thrilled that My Little Pony: A Maretime Bay Adventure is finally out today. We’ve loved working with our long time partners Hasbro and taking this new generation of ponies and the magical world of Equestria from TV screens to consoles and PC for the first time in five years. The game is full of all the things fans love about the franchise; friendship, colour magic and adventure. We hope everyone has the best time playing it!”

Eugene Evans, Senior Vice President of Business Development and Digital Licensing, from Hasbro said ‘’It’s been great to see these wonderful characters and the enchanting world of Equestria captured within a video game by our friends at Outright Games. We’re looking forward to even more fans experiencing the adventure and magic of My Little Pony with the fifth generation of ponies’’

From its toy launch in 1983, MY LITTLE PONY has catapulted from iconic toy line into a worldwide entertainment universe. In September 2021, MY LITTLE PONY: A NEW GENERATION launched on Netflix and introduced a new generation of ponies to a new generation of kids. The feature-length film became the #1 kids property at launch and was awarded the Common Sense Media Seal for Families. The movie kick-started a new era for the brand, with a focus on inspiring todays' kids to explore, express and celebrate what makes them unique. This new generation of ponies has its own fresh toy line and licensed consumer products across multiple categories, with a wealth of content set to launch in 2022. MY LITTLE PONY has aired in nearly 200 territories and over 350 episodes and three feature films have been produced.

My Little Pony: A Maretime Bay Adventure is available today on Nintendo Switch, PlayStation 4, Xbox One and PC. The game will also launch on Google Stadia in summer with free next gen upgrades for existing Xbox and PlayStation 4 owners later in 2022. 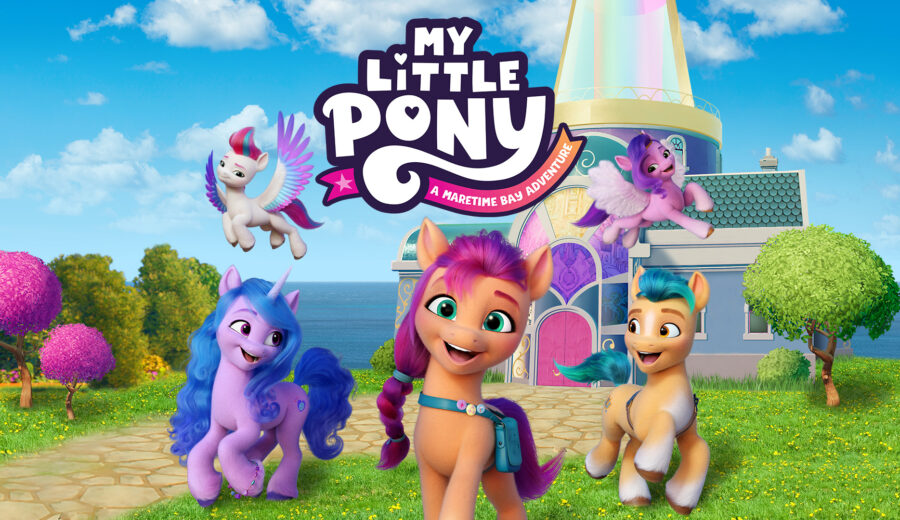 Want to know more about ‘MY LITTLE PONY: A MARETIME BAY ADVENTURE’?