London, October 16th - Worldwide family entertainment publisher Outright Games™ in partnership with P.W Games™, the gaming division of kids entertainment studios pocket.watch™, and Sunlight Entertainment get into gear and today have released the Race With Ryan Road Trip Deluxe Edition. Ringing together every racer, track and the original game in the perfect bundle gift for fans of the hugely popular YouTube sensation Ryan’s World that receives over 1.4 billion views per month. 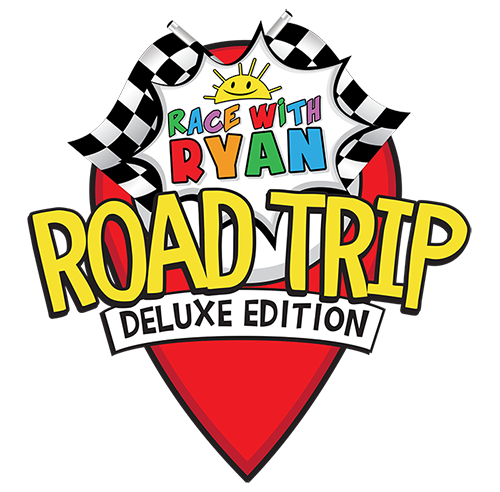 Race With Ryan Road Trip Deluxe Edition is the ultimate Race With Ryan experience bringing together the original title and all new content released since launch for a total of 16 tracks and 33 fan favourite racers. The brand new DLC pack adds 2 new tracks and 7 racers including Montana Panda, Nevada Ryan and Wisconsin Lexa. Fans of all ages can take to the track with their favourite racer and cruise along Route 66, Icy Land, Forest, Redwood and New York, New York, before zooming to the finish line. With kid friendly controls, 2-4 player split-screen races, Ryan’s Mystery Egg surprise items, and career mode for the most ambitious racers, Race With Ryan Road Trip Deluxe Edition is the perfect Christmas gift for fans of Ryan and colourful kart racers alike!!

“It’s been amazing to see the popularity of Ryan’s World continue to increase since we released the original game last year and we wanted to give fans of the game the ultimate gift leading up to holiday 2020” said Terry Malham, CEO of Outright Games “We’re thrilled to bring Ryan fans the full Race With Ryan experience and add to the ever expanding Ryan’s World universe.”

“We’ve seen the popularity continue to expand this year, through increased viewership on his channels as well as new TV shows and wildly popular content on streaming platforms’” says Stone Newman, Chief Revenue Officer of pocket.watch. “Working with Outright Games has allowed us to create distinctly unique experience on game consoles that we know fans will absolutely love playing together this Christmas””

Race With Ryan is the hit multiplayer kart racer from the global kids entertainment phenomenon Ryan’s World starring Ryan, the most popular kid in the world and top creator on YouTube.

Race With Ryan: Road Trip Deluxe Edition is available now for Xbox One, PlayStation 4, Nintendo Switch and PC Digital and exclusively at Walmart and Smyths Toys Superstores. Also available in retailers across the Middle East and Spain.

Outright Games is a global video games publisher with a focus on quality family entertainment to a worldwide audience. Founded in 2016, Outright Games has established its place in the market delivering engaging interactive games of beloved entertainment licenses globally. Outright Games brings stories and characters to life with titles including favourites such as Jumanji: The Video Game

with Sony Pictures, Paw Patrol: On a Roll with Nickelodeon, Ben 10 with Cartoon Network, and Dragons: Dawn of New Risers with NBC Universal. With an Outright Games title there will be fun for all the family to enjoy. For more information please visit: www.outrightgames.com

Pocket.watch is a new studio that specializes in entertaining and inspiring kids and families through digital-first content and sparking their imaginations with lifestyle products ranging from toys to toothbrushes. The company inspires kids to seamlessly move between screen time and playtime and boasts a growing portfolio of franchises that includes some of the largest kids and family YouTube brands in the world. Pocket.watch is the exclusive studio partner for the Ryan’s World franchise and created and produces the Emmy-nominated television series Ryan’s Mystery Playdate, which airs on Nickelodeon and is the #1 preschool show on television. Pocket.watch’s newest brand, Love, Diana, based on the #3 YouTube channel in the world, Kids Diana Show, debuts in October 2020. The company was founded in March 2017 by Chris M. Williams and is located in Culver City, CA where it maintains an office and studio. Its management team is made up of studio veterans and visionaries from traditional and digital entertainment including Albie Hecht, Stone Newman, Jon Moonves, Kerry Tucker and David B. Williams. Investors include Viacom, Greycroft, Third Wave Digital and United Talent Agency (UTA), as well as notable strategic angels including Robert Downey Jr. (Team Downey) and Jon Landau. For more information about Pocket.watch, please visit Pocket.watch.

Want to know more about ‘RACE WITH RYAN DELUXE EDITION’?